Aka Ricarda Jordan and Elisabeth Rotenberg. Studied history and literature Ph. Want to Read Currently Reading Read. Refresh and try again. Open Preview See a Problem? Thanks for telling us about the problem.

Published first published January 1st To see what your friends thought of this book, please sign up. To ask other readers questions about Das Gold der Maori , please sign up. Lists with This Book. This book is not yet featured on Listopia.

I thought this book had potential, and also felt it could have been a lot shorter. The flip flopping in behavioral and moral character of the characters in the book left me feeling like they were all bipolar. The setting and history of the book I liked. The character development and backsliding from deep to shallow I did not like. 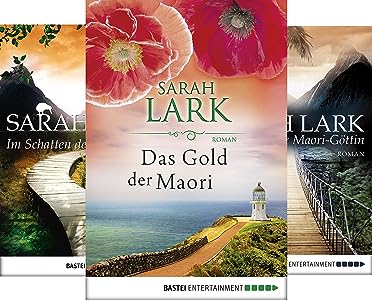 Definitely Sarah Lark disappointed me with this book. In other of her books I didn't want the end, but with this is only that I wanted. Predictable I knew what was going to happen very early on in this book. It is just okay, not too terrific. River people killed mountain people mainly by poison and sorcery, not by fighting openly with weapons. But the great-grandfather of one young mountain person had been shot and killed with arrows as he was sleeping in his garden hut some distance from the mountain village.

Did I remember that abandoned hut and the overgrown garden just below the ridge-line? That hut and garden had been made by the evil river people, as a way of asserting their claim to land on the north side as well as on the south side of the ridge-line. From my previous unpleasant experiences over perceived territorial trespassing in New Guinea, I realized that I had better take this situation seriously.

They demanded that I be accompanied by 12 men, and I responded with a proposal of 7 men. Furthermore, I was warned not to step off the ridge-line trail into that nice-looking forest on the gentle south slope. That forest unequivocally belonged to the river people, and it would cause big trouble, really big trouble, if I were caught trespassing there, even if just to watch birds.

Instead, the women walked every day all the way back down to the village and carried liter water containers 1, vertical feet uphill to our campsite. With one of the mountain men I went back to the trail T-junction and continued left along the ridge-line to clean up an old trail that had become overgrown. But then we heard voices coming uphill from the south side. River people!! I listened anxiously and tried to follow the movements of the voices and estimate their location. Yes, they were indeed ascending towards the ridge-line from their side.

Were they coming after us? I kept following the voices as they seemed to get louder, over the noise of my heart-beats throbbing in my ears. They were descending the north side towards our mountain village! Was this a war raid? But there seemed to be only two or three voices, and they were talking loudly: hardly what one would expect from a stealthy raiding party.

There was nothing to worry about, explained my mountain companion; everything was really OK. We mountain people he said acknowledge the right of river people to descend our trail peacefully to our village, and then to walk from there to the coast in order to trade. Some things were permitted and other things were forbidden by common consent, while still other things such as land ownership at the abandoned hut and garden were still in contention.

But their village was close enough that I once heard the sound of drums in their village coming up from the south watershed at the same time as I could hear faintly the sounds of shouting far below from the mountain village on the north watershed. As my mountain guide and I were walking back towards our campsite, we were making silly jokes with each other about what we would do to a river person if we caught one there.

River people! There, in our camp, was a group of our familiar mountain companions, talking with six people whom I had never seen before: three men, two women, and one child.


There, at last, I saw the dreaded river people! They were not the dangerous monsters that I had been unconsciously imagining, but instead normal-looking New Guineans, no different from the mountain people who were my hosts.

The river child and the two women were completely unintimidating. The three men carried bows and arrows as did all the mountain men as well but were wearing T-shirts and not looking as if they were dressed for war. The conversation between the river people and the mountain people seemed friendly and free of tension.

To the mountain people and the river people, this visit was evidently a normal part of their complex relationship incorporating a broad range of behaviors: rarely, killings by stealth; more often, reputed killings by poison and sorcery; acknowledged reciprocal rights to do some things such as passing in transit to the coast and making social visits but not other things such as gathering food and wood and water while in transit ; disagreement about other things such as that hut and garden that sometimes flared into violence; and occasional intermarriage at about the same frequency as stealth murders every couple of generations.

In theory, the spatial relations between neighboring traditional societies could encompass a whole spectrum of outcomes, ranging at the one extreme from non-overlapping exclusive territories with definite patrolled boundaries and no shared use, to free access of everybody to all land and no recognized territories at the other extreme. Probably no society strictly conforms to either extreme, but some come close to the first extreme.

For instance, my mountain friends whom I just described are not far from it: they do have territories with defined boundaries that they patrol, they do assert exclusive claim to resources within their territory, and they permit access by outsiders just for transit and rare intermarriage. People from one territory caught trespassing on another territory were routinely killed, unless they proved to be related to the territory-owners who caught them trespassing. The two commonest causes of trespass were hunters crossing a boundary in hot pursuit of reindeer, and seal hunters hunting on an ice shelf that broke off and drifted away from land.

In the latter case, if the ice subsequently drifted back to shore and the hunters found themselves landing in another territory, they were killed. Second, exclusive territories require a productive, stable, predictable environment within which the territory-owners can count on usually finding most or all of their necessary resources, such that they rarely or never need to go outside their territory.